Thami Mnyele was born the third of five children in Alexandra, near Johannesburg, on 10 December 1948. His father was a minister of religion and his mother a domestic worker. In the sixties, his father and mother separated, and Thami was sent to live with his brother, and later his uncle.

By the late sixties, his mother sent him to a boarding school in Pretoria. There were no art classes, but there were pens, pencils and paper material with which he began to draw at the age of fourteen. In his last year of Matric his mother could no longer afford school fees, so he left school.

In 1971, he joined Mhloti Black Theatre. Years later, he wrote:

"From time immemorial, Black talent in South Africa was white-produced, white-directed, and even white-owned! The result was a misrepresentation in the arts of what Black life and Black theatre was all about. Its aspirations, desires and wishes . . . everything that was negative was Black. On top of the above humiliations, the Black man was shamelessly and shamefully exploited. Mhloti Black Theatre emerged because of and as a result of this muck. To fight and to begin the eradication of it for all eternity".

By 1972, Thami decided his personal direction lay with the visual arts. Therefore he secured a grant to the ELC Art Centre in Rorkes Drift, Natal, where he received only one year of formal art training. After that year, he had to leave for he was the family breadwinner and had to remain employed in Alexandra in order to help his mother keep her house. Thami got a job as an illustrator for SACHED Trust, where he worked for the next seven years.

At this point, Thami viewed most South African artwork as protest and complaint: 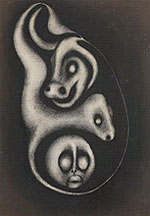 “Our work hasn't yet developed above the mere stage of protest: we're still moaning and pleading. And even that we do with inferior craftsmanship and insincerity. We must partake actively in the struggle to paint sincerely.”

He called for artists in the struggling communities to use their talent to express people's demands. This was linked to growing mobilisation at the grassroots level, which encourage artists to become a part of that mobilisation.

Mnyele was later to reflect on his position:

“What is a good artist in relation to a freedom fighter? ...I had managed to pick up most of the skills I needed which would enable me to be of service back home. To be of service is to integrate. The musicians of the fifties had not integrated into the community, they were the community itself. The community produced songs about the sudden ban of the African brew by the government; the community performed at a child baptismal ceremony and the community still performs at the funeral of a deceased member. Wouldn't it be good if I designed posters for these activities, painted banners, made postcards, Christmas cards, and taught these skills to those who need them?" (unpublished autobiography: 1984)

In June 1976, Mnyele, Fikgile and Ben Arnold held an art exhibition at the Dube YWCA. In describing the exhibit, Mnyele wrote:

“It happened at a crucial time, when we had to make a decision and take a stand to say: were we involved in the struggle and life around us, or were we merely producing "pictures"? ...Our exhibition was attended by thousands of people. In South Africa, as far as I know, not so many people attend art exhibitions, especially not people from the black sector. We had people standing at the door counting and there were more than a thousand people crammed into the place and there were more waiting outside. .  .We the artists were very excited because it meant we communicated, you know, something clicked.” (Staffrider 1980 Sept Oct, p.41)

The Dube exhibition, located physically within the June 1976 uprising, received no attention in the Johannesburg art world, or in the press. But it became a signpost of a new attitude towards the arts, one which permeated resistance culture for the next decade and a half.

In 1979, Thami was forced into exile in Botswana. There he was to become a leading figure within Medu Art Ensemble and a committed ANC cadre.

Thami vehemently rejected any separation between his art and the demands of South African resistance. He quoted Sekou Toure:

Mnyele then took this argument further:

"Our work hasn't yet developed above the mere stage of protest: we're still moaning and pleading. And even that we do with inferior craftsmanship and insincerity. We must partake actively in the struggle to paint sincerely."

In the years in Botswana, Mnyele made and exhibited graphics, drawings, and fine arts, and organised cultural workers through Medu Arts Ensemble. In those years he also participated fully in Umkhonto we Sizwe (MK), the ANC's military wing.

In the early 1980s, Thami Mnyele also spent some time training in the MK camps in Angola, and later in Lusaka. During these trips he worked with ANC printers designing posters, mastheads, and even stickers under the ANC's name. He designed the first draft of the current ANC logo during this period.

Mnyele chaired the Gaborone Culture and Resistance Festival in 1982, and gave the keynote addresses. He was also a spokesperson for South Africa's visual artists at the follow-up conference in Amsterdam in 1983.

On June 14, 1985, Thami Mnyele was shot dead by South African Defence Force (SADF) soldiers outside his home in Gaborone. He had expected to move to Lusaka the next day and large collections of his works that were packed into a portfolio were taken by the SADF. A week later, Security Major Craig Williamson displayed the portfolio and the works in it on SABC television, as evidence of Thami's 'terrorist' activities. To date, these works have not been recovered from the security police.