Journalist, academic and political activist, Ruth Heloise First was born on 4 May 1925. She was the daughter of Jewish immigrants Julius and Matilda (neé Levetan) First. Julius, a furniture manufacturer, was born in Latvia and came to South Africa in 1906 at the age of 10. Matilda came to South Africa from Lithuania when she was four years old. They were founder members of the Communist Party of South Africa (CPSA, later South African Communist Party [SACP]) in 1921. Ruth and her brother Ronald grew up in a household, in which intense political debate between people of all races and classes often took place.

After matriculating from Jeppe High School for Girls, First studied at the University of the Witwatersrand, Johannesburg, from 1942 to 1946. She graduated with a BA (Social Studies), receiving firsts in sociology, anthropology, economic history and native administration. Her fellow students included Nelson Mandela, Eduardo Mondlane (Mozambican freedom fighter and the first leader of FRELIMO), Joe Slovo, JN Singh (executive member of both the Natal and South African Indian Congress), and Ismail Meer (a former secretary-general of the South African Indian Congress). First helped found the Federation of Progressive Students and served as secretary to the Young Communist League, and was active in the Progressive Youth Council and, for a short while, the Johannesburg branch of the CPSA.

In 1947 First worked, briefly, for the Johannesburg City Council, but left because she disagreed with the actions of the council. She then became the Johannesburg editor of a left-wing weekly newspaper. As a journalist she specialised in investigative reporting and her incisive articles about slave-like conditions on Bethal potato farms, the women's anti-pass campaign, migrant labour, bus boycotts and slum conditions remain among the finest pieces of social and labour journalism of the 1950s.

Having grown up in a politically conscious home, First's political involvement never abated. Apart from the activities already mentioned, she did support work for the 1946 mineworkers' strike, the Indian Passive Resistance campaign and protests surrounding the outlawing of communism in 1950. First was a Marxist with a wide internationalist perspective. She travelled to China, the Union Soviet Socialist Republic (USSR) and countries in Africa, experiences that she documented and analysed. She was central to debates within the Johannesburg Discussion Club, which led to the formation of the underground SACP (of which First was a member) and to closer links between the SACP and the African National Congress (ANC). 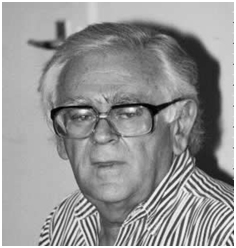 Joe Slovo, from the www.sacp.org.za

In 1949, First married Joe Slovo, a lawyer and labour organiser and, like her, a communist. Throughout the 1950s their home in Roosevelt Park was an important centre for multiracial political gatherings. They had three daughters: Shawn (who was to script a film about her mother called A World Apart), Gillian (who based her novel, Ties of Blood, on her family history) and Robyn. Frequent house searches and the banning and arrest of their parents by the police constantly unsettled their childhood.

Despite her public profile and wide contacts, First remained a private person. She had a brilliant intellect and did not suffer fools gladly. Her sharp criticism and her impatience with bluster earned her enemies and she was often feared in political debate. However, she was not dogmatic. First’s willingness to take up a position which she considered to be just, was not always welcomed within the ANC or SACP. However, contradictions between her politics and her role as a mother caused strains within her family, which are revealed in the later works of her daughters.

In 1953, First helped found the South African Congress of Democrats (COD), the White wing of the Congress Alliance, and she took over as editor of Fighting Talk, a journal supporting the alliance. She was on the drafting committee of the Freedom Charter, but was unable to attend the Congress of the People at Kliptown in 1955 because of her banning order. In 1956, both First and Slovo were arrested and charged in the Treason Trial. The trial lasted four years, after which, all 156 accused were acquitted on 29 March 1961.

First considered herself to be primarily a labour reporter, and during the 1950s she was producing up to 15 stories a week. Despite this high work rate, her writing remained vivid, accurate and often controversial. Her investigative journalism was the basis of her longer pamphlets and, later, her books. The transition to more complex writing came easily.

During the state of emergency following the Sharpeville shootings of March 1960, First fled to Swaziland with her children, returning after the emergency was lifted, six months later, to continue as Johannesburg editor of New Age (successor to The Guardian). In the following two years she wrote South West Africa, a book, which remains the most incisive history of early Namibia. During this time she also helped to organise the first broadcasts of Radio Freedom from a mobile transmitter in Johannesburg.

On 9 August 1963, First was detained at the Wits University library. This took place following the arrests of members of the underground ANC, the SACP and Umkhonto we Sizwe in Rivonia on 11 July. In the trial which followed, political leaders such as Nelson Mandela, Walter Sisulu and Govan Mbeki were sentenced to life imprisonment. However, First was not among the accused. She was kept in solitary confinement under the notorious 90-day clause. After 90 days First was released but immediately re-arrested on the pavement outside the police station. She was held for a further 27 days, during which she attempted suicide. During this time her father fled South Africa. Soon after her release First left with her children to join her husband, Joe Slovo, who had already fled the country to Britain.

The family settled in North London and First threw herself into anti-apartheid politics, joining the Anti-Apartheid Movement, holding talks, seminars and public discussions in support of the ANC and SACP. Her book 117 Days, an account of her arrest and interrogation in 1963, which was published in 1965, was also made into a film with First playing herself.

During the 1960s, First researched and edited Mandela's No Easy Walk to Freedom (1967), Govan Mbeki's The Peasant's Revolt (1967) and Oginda Odinga's Not yet Uhuru (for which she was deported to Kenya). With Ronald Segal she edited South West Africa: Travesty of Trust (1967). From 1973, First lectured for six years at Durham University, England, on the sociology of underdevelopment.

In the 1970s, she published The Barrel of a Gun: the Politics of Coups d'etat in Africa (1970); followed by Libya: the Elusive Revolution (1974); The Mozambican Miner: a Study in the Export of Labour (1977); and, with J Steele and C Gurney, The South African Connection: Western Investment in Apartheid (1972). It was during this time that she read contemporary feminist works, resulting in a work which she wrote with Anne Scott, Olive Schreiner (1980). Many of these works were landmarks in Marxist academic debate.

In 1977, First was appointed professor and research director of the Centre for African Studies at the Eduardo Mondlane University in Maputo, Mozambique. She began work on the lives of migrant labourers, particularly those who worked on the South African gold mines. The results of this study were published as Black Gold: the Mozambican Miner (1983). 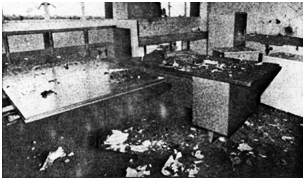 Ruth First's office after the explosion. Photograph: Tempo, from www.mozambiquehistory.net

Following a United Nations Educational, Scientific and Cultural Organisation (UNESCO) conference at the centre on 17 August 1982, First was killed by a letter bomb, widely believed to have been the work of security agencies within South Africa. Until her death, she remained a ‘listed’ communist and could not be quoted in South Africa.

Her close friend, Ronald Segal, described her death as ‘the final act of censorship’. Presidents, members of parliament and ambassadors from 34 countries attended her funeral in Maputo, Mozambique.

During the Truth and Reconciliation Commission (TRC) hearings, after 1995, it was determined that the bomb that killed First had been put together by Jerry Raven, based on an order from Craig Williamson, a former spy in the South African security police. However, during the proceedings in Craig Williamson’s amnesty hearings, he denied being aware that the bomb was to be sent to First. The TRC granted both Williamson and Raven amnesty. This judgement was upheld when the Slovo family challenged the ruling.

In honouring the memory of First, an environmental patrol vessel named the Ruth First was launched in 2005 by the Department of Environmental Affairs. In 2010, First’s former high school, Jeppe Girls, set up a scholarship entitled the Ruth First Jeppe High School for Girls Memorial Trust, with Albie Sachs as patron.

To read a collection of writings by Ruth First, visit The Ruth First Papers at http://www.ruthfirstpapers.org.uk/