Cheryl Carolus was born on 20 April 1959 in the Cape Flats of Cape Town to a working class family. Her father was employed as a printer’s assistant and her mother worked as a nurse aid. She attended local schools and was selected as head prefect in matric. She was a member of the South African Black Students Association and immediately embarked on a campaign to replace the conventional prefect system with democratic elections for a Students’ Representatives Council. After matriculating, Carolus registered for a BA degree and a teacher’s diploma at the University of the Western Cape (UWC). She was still active in politics, especially the Black Consciousness group, the South African Students’ Organisation (SASO). She was detained for five months in 1976. Carolus became a History and English teacher and was involved in the 1981 school boycotts, taking part in grassroots organisations. In 1981, she registered at UWC for a BA Law degree, served on the Students’ Representatives Council, and worked for the Churches Urban Planning Commission in 1982 and 1983. 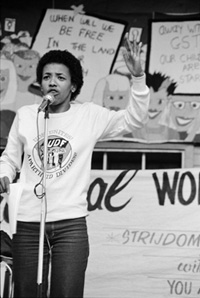 Cheryl Carolus speaking at the University of the Witwatersrand on Women's Day, 1984. 1984 was the ANC's Year of the Woman. Photograph by Gille de Vlieg, supplied by African Media Online

In January 1986, Carolus travelled to Sweden at the invitation of the International Centre of the Swedish Labour Movement as a member of a UDF delegation, she was detained in her returning from Sweden as a member of UDF. They met with officials of the Socialist Democratic Party, (the ruling political party in the country), important labour representatives and the Swedish Minister of Foreign Affairs and Development. African National Congress (ANC) executive members Alfred Nzo, Thomas Nkobi and Thabo Mbeki also met with the delegation.On her return to South Africa in January 1986, Carolus was arrested at John Vorster Square in Johannesburg for three weeks under emergency regulations. She was released but was restricted to the Cape magisterial area of Wynberg and was not allowed to take part in any UDF activities. Further restrictions included not being allowed to associate with any publications, entering educational institutions or attending meetings where government policies were discussed or criticised.

In 1989, Carolus became the Western Cape spokesperson during the Defiance Campaign organised by the Mass Democratic Movement (MDM) and was also a member of the joint delegation of the UDF, the Congress of South African Trade Unions (COSATU) and the National Education Crisis Committee that attended the Organisation of African Unity (OAU) meeting in Harare. This gathering was important because it was the first occasion where South Africans living in the country had attended an OAU meeting. The delegation supported a document, presented by the ANC that laid out the conditions for negotiations in South Africa. On 5 November, Carolus was arrested again and detained under emergency regulations at the Ravensmead police station in Cape Town. She was released on 16 November.

After the ANC’s unbanning and Nelson Mandela’s release in February 1990, Carolus formed part of the team of ANC representatives that met with the government at Groote Schuur in May, which produced the historic Groote Schuur Minute. On 29 July 1990, the South African Communist Party (SACP) launched itself as a legal entity.  Carolus was elected as a member of its interim leadership group. She remained in this position until December 1991. She was the first ANC delegate member to meet with the De Klerk government.

In July 1991, the ANC held a national conference in Durban. Carolus was elected to its National Executive Committee (NEC) while also serving on the organisation’s National Working Committee (NWC), a full-time position based in Johannesburg. She held the health portfolio position, leaving her prior job as Staff Development Officer at the Education Resource and Information Project at UWC. In 1994, she declined to stand for Parliament and in December that year was elected deputy secretary-general of the ANC, and she become the highest ranking woman to hold an executive position in the organization. In 1995, she played an important part in the ANC’s local elections and on 2 March 1998 assumed the post as South Africa’s High Commissioner in London. During a high profile three-and-a-half year tenure, she forged strong parliamentary, NGO and global business relationships. One of her successful campaigns in the UK was the staging of an eight-week long ‘Celebrate SA’ at Trafalgar Square sponsored by De Beers. In 1998 to 2001, Carolus served as ambassador to Britain.

On 1 November 2001, she returned to South Africa to take up the position as Chief Executive Officer of South African Tourism until 2004. During her three-year tenure as CEO with SA Tourism, she spearheaded the country’s repositioning as a global tourism destination of choice, led a process that saw Cabinet adopting a new Tourism Growth Strategy and the organisation’s move to becoming a cutting-edge, international award winning tourism marketing authority. Carolus is a co-founder of Peotona Capital, the women’s investment company that owns a 16% share in Ponahalo Investment Holdings, a new generation black empowerment company. Ponahalo Investment Holdings holds a joint 50% stake in Ponahalo that owns a 8% of the South African unit of De Beers, the world's top diamond miner, and is buying part of cement maker Lafarge SA's operations. She joined the private sector as part of black economic empowerment company in 2005 and also served as chairperson of South African Airways (SAA) 2009 to 2012.

Carolus also served as a board member in various sectors such as International Crisis Group, WWF International and WWF SA, International Marketing Council of South Africa, Soul City Health Institute and as the Mpumalanga Premier’s Economic Advisory Council among others. In 2004, Carolus was awarded an Honorary Doctorate in Law by the University of Cape Town for her human rights’ work. Click here to see the ANC’s appointment of Cheryl Carolus as South Africa's High Commissioner in London.