1976
16 June, Extra police patrols are deployed.
24 June, The Principal's office in Hlangisi Primary (Nyanga) was burnt out and the following day the same riot squad threatened officials at the Bantu administration.
27 June, Further arson occurs on Langa Post Office and Zimosa school.
2 August, UWC students convene a meeting to express solidarity with the students of Soweto and decide to embark on a boycott of classes.
6 August, The Hewat Training College in Athlone is set alight in solidarity with the UWC boycotters.
8 August, Fire destroys Struis Bay school Principal's office.
10 August, Part of a prefabricated building of the Peninsula College for Advanced Technical Education is gutted and three explosives are found at Goodhope Primary in Bellville South.
11 August, African pupils from Langa, Gugulethu and Nyanga hold marches in solidarity with the Soweto students. The Langa students march with placards through their township streets accompanied by their teachers who are determined to keep order. Students are also under police surveillance and 33 people are shot dead in looting related incidents. The police stop the Gugulethu events and students are told to disperse in 8 minutes. The students stand their ground and are eventually showered with tear gas. 25 - 30 people are arrested. The determined crowd goes on to successfully demand the release of the detainees from the Gugulethu police station. 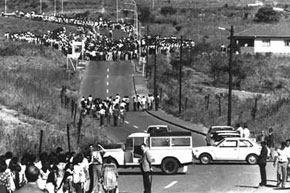 The youth march from Naledi Township, at the south western end of Soweto, collecting others on their route to Orlando East, the north eastern end of the vast complex. (Bailey's African History Archives)

A number of student leaders at the University of the Western Cape and other community leaders are arrested and detained at Victor Verster prison, near Paarl
12 August, This day saw R2 million worth of damage in 36 hours of fighting. Langa and Gugulethu residents stop employees leaving for work. Young children request donations of petrol from cars to make petrol bombs. Students at the Esselen Park High School in Worcester demonstrate in front of the school and are tear-gassed and baton charged.
UCT students march towards the city centre giving the Black Power Salute to black people passing until the police stop them. 73 students were arrested.
In Bellville, 600 coloured students march from the Bellville Training College and clash with police whilst in UWC a poster parade is broken by police. Poster bearers are arrested because of messages such as: “Sorry Soweto, Kruger is a pig; the revolution is coming”
14 August, There are reports of arson in the African townships.
16 August, Pupils at Alexander Sinton High and Belgravia High boycott classes. 500 UWC students march to the Bellville Magistrate's Court were 15 students appeared on a number of charges arising from the recent events. There is a fire in Arcadia High and classes were boycotted at Somerset West after permission to hold prayer in sympathy with ‘Blacks who have died'.
23 August, An Athlone High school student statement is made condemning police brutality, inferior education, segregation laws and the plight of the detainees. The police change tactics and start going into schools to seek confrontation and to break the youths' spirit.
30 August, About 600 students from five secondary schools march to Bontheuwel. On their way they are confronted by four riot squad vans. The students are peppered with tear gas and hide in a nearby house. The police flushed the backyard with tear gas to prevent exit.
1 September, About 2 000 Langa, Nyanga and Gugulethu students march without notice or publicity through the Cape Town CBD unhindered.
2 September, The coloured students march to the city in the hope that they will also display a peaceful march. The police were prepared and close down the CBD. The tear gas they spray on students affects all working people there, who later are forced into the chaotic streets by the smell. The city marches continue to September 3 when police execute similar action as the previous day. It appears that the Cape Town revolt has passed the point were intimidation can force youth off the street.
4-5 September, The youth come out in the coloured townships. Schools, libraries and a magistrates court are set alight.