The formation of the CPSA in 1921 was a turning point in the development of labour politics in South Africa. The organised labour movement until the 1920s consisted mainly, but not exclusively, of members from the White working class.

Since its formation the CPSA worked to change South Africa’s political landscape, often in conjunction with other political organisations. One of the most important relationships it maintained was with the African National Congress (ANC). Although the relationship was based on a tumultuous beginning, with the ANC rejecting communism in the 1930s, a strong working relationship to achieve national liberation developed during the 1950s – and this bond extended into the exile years and persists today.

In its involvement in mass struggles that focus on organising workers around issues of workers’ rights, the SACP continues to play an important role in South African politics.4

The founding conference of the Communist Party of South Africa (CPSA) took place in Cape Town from 30 July to 1 August 1921. The party was founded mainly by radical White workers and socialists who had experienced workers' struggles in Europe and were inspired by the first workers' state, which was founded in 1917 in Russia, after the Bolshevik Revolution.

The founding conference was preceded by a public meeting in Cape Town on 29 July, attended by over two thousand mainly Coloured workers. William H (Bill) Andrews addressed this meeting and announced the establishment, aims and character of the new Party. The conference formally established the Communist Party of South Africa (CPSA) on 30 July and adopted its constitution and manifesto. The conference also elected an executive with its headquarters in Johannesburg. Andrews was elected as secretary, CB Tyler as chairman, and Sidney Percival Bunting as treasurer.

The formation of the CPSA marked a decisive turning point in the evolution of labour politics in South Africa. Up until then the organised labour movement consisted mainly of White working class members. Throughout the 1920s the CPSA focused on organising African workers around issues of trade union rights and national liberation demands, and by 1925 the party had a majority of Black members and in 1928, the CPSA called for Black majority rule.

It was also during this period that the CPSA and the African National Congress (ANC) began a close working relationship. Although there was much conflict in this relationship due to different working methods and ideas, and the ANC even rejected communism in 1930, it was a lasting relationship as result of a strong bond built up in exile post 1950. From the 1930s to the 1950s the CPSA engaged in mass struggles throughout the country and published various newspapers including Umsebenzi, The Worker and The Guardian.

The CPSA did not only work closely with the ANC, it also wholeheartedly supported the All African Convention, the Indian Congress and the Coloured African People's Organisation.

In 1946 the CPSA and the African Mine Workers Union organised the largest strike to take place during the Smuts regime. The strike was in the Witwatersrand and the strickers were demanding a wage of 10 shillings per day (approximately 4 times what they were earning). The strike meant that 11 of the 45 mines on the Witwatersrand came to a standstill. The strike lasted four days and more than 500 people were subsequently charged with conspiring to contravene War Measure 45 of 1942, which prohibited Blacks from striking. Amongst those charged were prominent CPSA members; JB Marks, Moses Kotane, Danie du Plessis, Dr Yusuf Dadoo, Hilda (Watts) Bernstein and Brian Bunting.

In 1950 the apartheid government introduced the Unlawful Organisation bill and later changed its name and focus to the Suppression of Communism bill. The bill was introduced for many reasons but one of the main reasons was the Governments growing concern at the number communists that were infiltrating non-White political organisations e.g. Moses Kotane, JB Marks and Dan Tloome in the ANC, and Dr Dadoo, Dr GM Naiker and YA Cachalia in the South African Indian Congress. Even in the Senate, House of Assemply, and Cape Provincial Council there were communists among the representatives of the Blacks, such men as HM Basner, Fred Carneson and Sam Khan. Howerver it was in the Trade Unions, both White and non-White that communism had gained a firm hold (e.g. Solly Sachs in the Clothing Worker's Union).

In March 1950 the Communist Party of South Africa, the African National Congress (Transvaal), the Indian Congress and the African People Organisation organised a “Freedom of Speech Convention” in Johannesburg. The Convention was called to protest the Suppression of Communism bill and a ban imposed on Dr.Dadoo and Sam Khan prohibiting them from speaking in certain cities. 500 delegates attended the Convention and 10.000 people attended the rally afterwards.

At the convention it was decided that a series of protests marches and meetings would be held across the country culminating in a national “stay at home” on the 1st May.

The ANC youth league viewed the call for the stay at home on 1st of May as undermining their own plan to for a general strike on 1st May and actively set about disrupting meetings held by the Convention organizers.

In response to the 1st May call to “Stay at Home”, the government banned all meetings and sent police reinforcements to Johannesburg. However, the protest went on and on 1 May the police attacked gatherings of protesters. For the first time since the 1921 Bulhoek Massacre the police opened fire on the protesters killing 18 and wounding 30 people ...read more

The Suppression of Communism Act was still scheduled to go ahead, so on 20 June 1950, only a few days before the Suppression of Comminism Act became law, Sam Kahn announced in the House of Assembly that the CPSA had disbanded. The decision to voluntarily disband was made on 4 May by the Communists Party's central committee, which met in Cape Town (15 votes to 2 votes). By this step the party wished to ensure that its assets would not be confiscated by the state and that Sam Kahn and Fred Carneson would retain their seats in the Assembly and Cape Provincial Council.

The government responded to this by amending the act in 1951 to people who had been communists at some previous stage in their lives. In May 1952 Kahn and Carneson were expelled from the House of Assembly and Cape Provincial Council, respectively.

In the same month The Guardian was banned. It reappeared later under names such as; The Clarion, The People's world, Advance, The New Age and Spark, but was repeatedly banned again.

At the beginning of 1953 a national conference was convened which adopted the name South African Communist Party (SACP) to replace the CPSA. The SACP would function as an underground organisation with the purpose of ‘carrying forward and raising the banner of the Communist movement under the new and testing conditions of illegality’. It saw its task as that of combining legal mass work with the illegal work of building the Marxist-Leninist Party. Marxist- Leninism refers to a combination of Marxist ideas and Lenin’s ideas. It was the way that Lenin adapted pure Marxism to suit the situation in Russia after the Bolshevik Revolution.

Before the prosecution case was even completed charges were withdrawn against 73 of the 156 accused, however those 73 were still quoted in the indictment as 'co-conspirators'. Of the ninety-one accused, fifteen had been members of the South African Communist Party and thirty were Whites or Indians, but only two of the Communists and five of the Whites and Indians were included among the final thirty accused. Only a few of the Africans accused were prominent ANC leaders .

In 1960 the African National Congress and Pan Africanist Congress were also banned, and went into exile. In November of 1961 some SACP and ANC members managed to meet in secret the Kwazulu Natal area. The party's decided to turn to an armed struggle and they launched Umkhonto we Sizwe (MK), a military branch separate from the ANC, to be led by the ANC and the SACP. In December 1961 MK exploded the first homemade bombs in a two-year sabototage campaign. Intended a a last resort 'to bring the government to its senses', the bombs were targeted against property, not lives.

The relationship between the ANC and the SACP in the 1960s was not always a close one. In fact after 1962 Nelson Mandela began playing down the ANC's relationship with the SACP when he returned from a trip through Africa, as African leaders were puzzled by the ANC's association with the SACP.

But along with the ANC, the SACP faced the same forms of suppression and infiltration in the 1960s. After the Lilliesleaf Farm Raid and Operation Mayibuye plans it was prominent SACP member Bram Fischer that defended those arrested as their lawyer in the infamous Rivonia Trial. He was eventually also tried and in 1965 sentenced to life imprisonment.

In 1969, immediately after the Morogoro conference the ANC and SACP met formally to discuss working together. Over the coming years they worked closely with the SACP bringing the experience of being underground for two decades to the table. During these years there were hadly any significant differences between the ANC and SACP, and many leaders were members of both organisations.

There were however some within the ANC who remained sceptical about working with the SACP and about relations with the USSR. They were particularly concerned with the fact that other western countries would withdraw support as a result of links with communism. These members did sometimes cause conflict, but it was also during this period that both organisations began to grow in stature and increased their activity among the oppressed people.

The SACP and ANC remained banned until 1990, and soon after being unbanned decided to give up the armed struggle in the period of negotiation. Chris Hani, SACP Secretary-General and MK leader, played a very important role in negotiation and in convincing more impatient people that negotiation was the best way, until he was murdered in 1993. Negotiations focused more on democracy than on communism or socialism, and a mixed economy was supported. Negotiations included a wide range of people by the end of 1991, in the form of the Convention for a Democratic South Africa (CODESA).

The SACP continued to play an important role in the early 1990s, usually with the ANC, and in the Government of National Unity. A Tri-party Alliance was formed between the SACP, the ANC and COSATU, which continues to this day.

END_OF_DOCUMENT_TOKEN_TO_BE_REPLACED 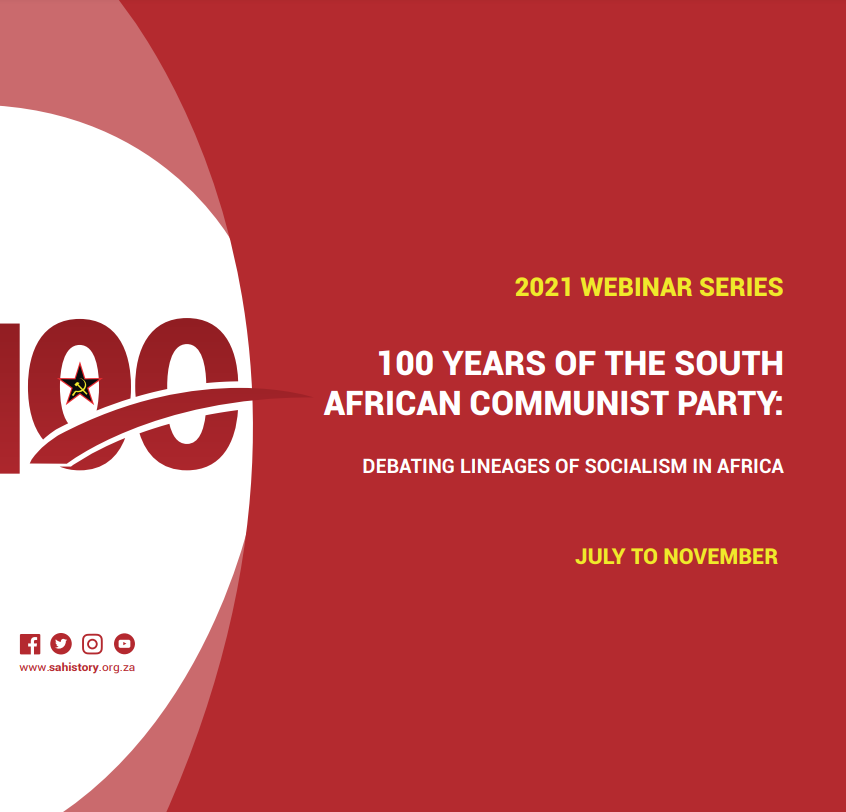