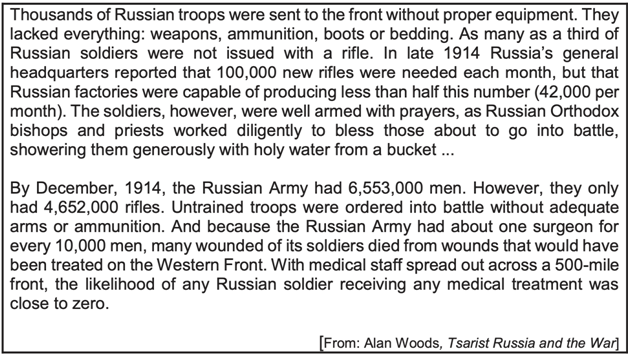 This source deals with Russia’s participation in the First World War.

2.  Use the source and your own knowledge to explain the outcome of Russia’s participation in the First World War.  (2x2) (4)

Russia’s participation in the war led to severe food shortages in Russia.  This in turn led to many Riots against the Tsar in Russia.

Russia’s participation in the war led to many people criticising their government.  Eventually, this meant that the Tsar was forced to abdicate.

During the early 20th century (1900’s), the Russian workers felt exploited and were dissatisfied with capitalist exploitation.  Although this dissatisfaction was relatively clear, the Tsar refused to listen to the Russian workers and ordered soldiers to shoot at them. Bloody Sunday was one of the first signs of the Revolution.  Russian defeat in the First World War led to significant dissatisfaction under the Russian population.  These defeats also led to a large food shortage throughout Russia.  Russian soldiers refused to suppress the marches against famine and even decided to join these marches. 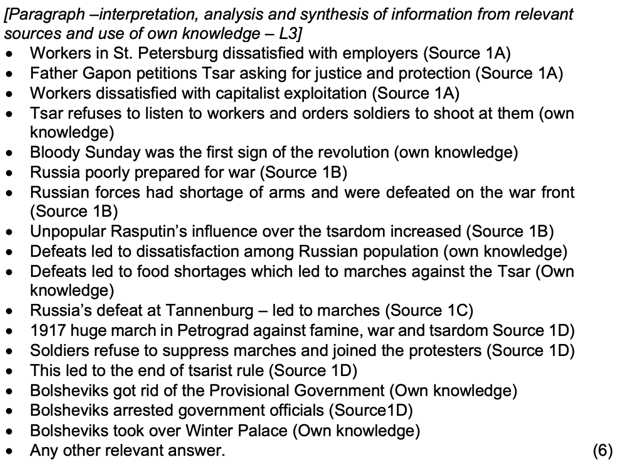 Here is an extract from the memorandum of the 2019 Grade 11 November history exam. Image Source