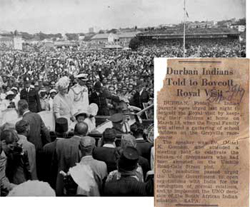 1854
15 May, The proclamation of the settlement of Durban into a Borough. The European population stands at 1,204.
1858
The Umzinto Sugar Company organises indentured Chinese and Malay labour from Java. These labourers were the first Muslim workers in Natal.
1860
September, Cemetery sites are set aside in Durban.
12 October, Mr. Fisher is appointed full time Town Clerk at a salary of 200 pounds per annum.
6 November, The first group of Indian indentured labourers arrive at the South Beach of Port Natal, which was later to become Durban. They arrived on the SS Truro. Records show that 342 indentured Indians arrived.
25 November, The second group of indentured labourers arrive. 24 people died on the journey from suspected cholera.
Badshah Peer, a member of the Qadafi Sufi order, an unorthodox Islamic cult, arrives in South Africa as an indentured labourer.
1861
March, The town council sets aside 15 17 4 to employ 17 adults Indians for 28 days labour at a rate of 8 d. per day.
1862
The population of Europeans in the borough numbers 2,567. 1593 Africans number and 153 Indians, making a total of 4,313. The majority of Indians are indentured workers employed by the City Council. Most of them are housed in the Cooperation barracks.
6 January, Father Ralph Scott arrives in Durban to set up a Methodist Mission amongst the Indian people.
1863/64
The barracks for “corporation Indians” are built.
1874
Durban’s population: Europeans 4129; Africans 2252; Indians1860. Total 8241.
Bishop Charles Constance Jolivet is appointed the second Vicariate Apostolic of Natal.
1876
Indian market gardeners start selling their fruit and vegetables in the Gardener Street area, behind the present Post Office.
Father Ralph Scott raises enough money to build a Methodist Chapel in Queen Street.
1877
A few ‘westernised’ Indian children are allowed to attend white schools.
1878
The Bell Street barracks are completed to house tough labour.
Lancers Road Recreation Ground is laid out for sports and athletic purposes.
Curries Fountain well is sunk and pipes are laid, providing the towns with water.
St Joseph’s Cathedral is designed by the English firm of architects Goldie, Child and Goldie and is built in this year.
1879
The Zulu War breaks out.
22 January, The Battle of Isandlwana takes place.
1881
Indians and Bamboo square – unhygienic conditions – the square was raised down in 1903 – Bubonic plague. (date not confirmed)
August – Aboobaker Amod (Jhavery) and Hajee Mahomed Hajee Dada purchase a site in Grey Street from K. Moonsamy for 115 pounds for the construction of a mosque. The Juma Masjid is the first mosque to be built in Natal.
1882
Grey Street is hardened at a cost of 811 pounds.
1884
Dr. Lancelot Parker Booth, a surgeon trained in Scotland who had joined the Natal Immigration Department as a District Surgeon and medical officer for the Alexandra county on the south coast, returns to England.
The brick and mortar structure erected in Grey Street in 1881 is rebuilt and enlarged.
15 February, The estate of Aboobaker Amod Jhaveri buys land adjacent to the Juma Masjid to enable its expansion.
Ismail Mahomed Paruk, a prominent Muslim, arrives in Durban from Mauritius and soon establishes his first retail business in West Street.
1885
Dr. Lancelot Parker Booth completes his theological studies and is ordained to the priesthood. He is appointed as Minister and later Diocesan Superintendent of Indian Missions in Natal.
1887
Kesur Jivan Kapitan, father of Ranchod, the owner of Kapitan’s Balcony Hotel, arrives in Durban.
Saint Aidan’s Church is built in Cross Street. It remains in use until 1966.
1889
Hajee Mahomed Dada, in his capacity as the only trustee of the Grey Street Mosque, purchases more adjoining land as a result of a sharp increase in worshippers.
1890s
The Durban Town Council attempts to shut down the Indian market, but after negotiations with the trustees of the Grey Street Mosque it is arranged that the market continues to operate on a nominal annual payment of ten pounds to the Durban Corporation.
Towards the end of the decade African refugees from Zululand move to the city to find employment.
1890
The Indian Committee, Durban is formed.
1894
The Natal Indian Congress is established.
1897
14 September, The Saint Aidan’s Mission Hospital is opened with the help of funds donated by the Natal Indian Congress and Parsee Rustomjee.
1899
The government discontinues the admission of Indian children into white schools.
The Higher Grade Indian School is established by the government.
9 January, The constitution of the Juma Masjid Sunat Anjuman Islam is amended and signed.
22 March, Seven Muslim merchants from Durban form the Mohammedan Trust Kings Rest buy a piece of land intended for the occupation of the Zanzibari community.