The Black People’s Convention (BPC) was an umbrella organisation of the Black Consciousness Movement (BCM). BCM had its origins in university campuses, mainly white, liberal universities. Many of the campaigns that were undertaken under its auspices were carried out by formations that embraced BPC’s Black Consciousness (BC) philosophy. The Pro-Frelimo rally staged by students at the University of the North and the historic student uprising in Soweto on 16 June 1976 were inspired by BPC and its BC philosophy. It is for this reason that many of the campaigns undertaken in the 1970s are associated with formations that fully recognised BPC and embraced its BC philosophy. Any account of campaigns involving these formations has to recognise and acknowledge the influence of BPC in this phase of the struggle against apartheid.

In the decade between the formation of the South African Students’ Organisation (SASO) in 1968 and the banning of all BCM formations in 1977, far-reaching changes had occurred on the political landscape. The guiding principles of non-racialism that defined the conduct of the struggle for liberation in the 1950s and 1960s were discarded and replaced by an approach that characterised whites as part of the problem. The Black Consciousness (BC) philosophy that BCM formations articulated and promoted was a distinct departure from the non-racial struggle of the 1950s and 1960s, whose guiding principle was enshrined in the Freedom Charter.

Opposition to apartheid following the Sharpeville massacre and the initial MK and Poqo operations that established armed struggle as an option took the form of mild condemnation from white, liberal and English-speaking political parties and civil society formations. White university students in English speaking university campuses were particularly vocal in their opposition to apartheid. The National Union of South African Students (NUSAS) was at the forefront of this movement, attracting a significant number of Black students. But Black students soon became disillusioned with NUSAS when it was perceived that they too endorsed some aspects of apartheid and racism. According to Barney Pityana, for white students “NUSAS was a nice, friendly club, another game you played while at university. Then you grew out of it.”

Black students became disillusioned with the moderation of NUSAS policy and formed SASO as an alternative in 1968. For the duration of his studies at the University of Natal, Steve Biko was actively involved in SASO’s programmes. In 1972 he terminated his studies and had to withdraw from student politics, and turned his attention to the need for a political formation that would mobiles adult constituencies. This led to the founding of BPC, and Biko became its first president. After he was killed in detention in 1977 he was declared the honorary life president of BPC.

It appears that political activity can rarely be ascribed directly to BPC, which was banned in 1977. But BPC inspired the birth of other political formations focusing on specific aspects of resistance to and struggle against apartheid – one of these being the Black Community Programmes (BCP). BCP’s key objectives included promoting the social upliftment of Black people, enhancing their general literacy and economic self-reliance. For each of these aspects there was a need to establish a dedicated structure. With the BC philosophy becoming more clearly defined, various other formations, influenced by its set of ideas, were established. 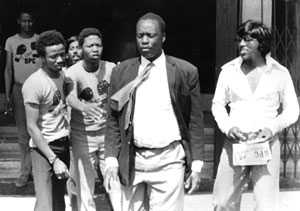 The South African Students Movement (SASM) was established in 1972. Inspired by the BC philosophy, SASM mobilised high school students. The Soweto branch of SASM formed an Action Committee, the Soweto Students Representative Council (SSRC), a body that conceived and organised the students’ uprising of 16 June 1976. Following the Soweto students uprising, the Black Parents Association (BPA) was formed and acted as a pressure group that intervened in the ongoing conflict between authorities and students. In 1977 a group of journalists formed the Union of Black Journalists (UBJ).

In the period leading up to 1976 uprising, youth and students in Black townships were actively involved in youth and cultural clubs. At first these clubs promoted extra-mural activities like table tennis, dance clubs, choirs, and a range of leisure activities. But they were increasingly influenced by political ideas, and formed overtly political formations such as the National Youth Organisation (NAYO), which was reputed to have played a significant role in the outbreak of the Soweto students uprising.

Between 1975 and 1977 other formations emerged, embracing the BC philosophy and critical of apartheid and racism in their midst. Medupi Writers Association became a cultural group, inspired by BC philosophy and engaged in poetry, arts, music and dance.

The government’s first reaction to BCM came in 1973. Eight BCM leaders were banned and restricted to specific magisterial districts. Biko was restricted to King William’s Town, and he was instrumental in the establishment of the Zimele Trust Fund, established to help political prisoners and their dependants while they were incarcerated and providing a cushion for them once released and before they could find employment.

In the meantime, SASO and the newly-formed Black Allied Workers Union (BAWU) undertook numerous campaigns. In his speech during the graduation ceremony at the University of the North in 1972, Onkgopotse Abram Tiro launched a scathing attack on university management and government. Tiro was expelled from the University. He was offered a teaching post at Morris Isaacson School in Soweto, where he is reported to have inspired the formation of SASM. The Durban strikes of 1973, involving 40 000 workers, were coordinated by a range of organisations. The role of BAWU (an affiliate of BCP) in the strike remains uncertain. However, with a significant presence in Durban, it is unlikely that BAWU remained completely uninvolved in the strikes.

In February 1973 eight BCM leaders were banned. All were either executive members of BPC or were involved with the organisation in various ways. Biko, forced to move to King William’s Town where he was restricted, helped establish the Eastern Cape branch of BCP. He worked in the BCP office until 1975, when a clause further prohibiting his movement was inserted into the banning order. He appeared in the SASO-BPC trial in May 1976 as a witness, and used the courtroom to articulate his BC philosophy in his now famous responses to defence attorney David Soggot.

The end of Portuguese rule in Angola and Mozambique in 1974 was an inspiration to students at universities across South Africa. Pro-Frelimo rallies were hosted by Students Representative Councils (SRCs). At the University of the North, the Pro-Frelimo rally was banned by management, but students defied the order and went ahead with the rally.

Between August 1976 and March 1977 Biko was arrested several times for violating his banning order. The last arrest in August 1997 ended tragically when he was killed on 12 September 1977. No doubt his death left BPC and the entire BC movement rudderless. He was succeeded as President of BPC by Hlaku Rachidi.  A month later, BPC was one of 18 BCM formations to be banned.