On 24 December 1651, accompanied by his wife and son, Jan van Riebeeck set off from Texel in The Netherlands for the Cape of Good Hope. Van Riebeeck had signed a contract with the Dutch East India Company (VOC) to oversee the setting up of a refreshment station to supply Dutch ships on their way to the East. Sailing on the Dromedaris with two other ships, the Rejiger and De Goede Hoop, Van Riebeeck was accompanied by 82 men and 8 women.

Land was sighted on 5 April 1652 and the ships docked the next day. Within a week of the arrival of the three ships, work had begun on the Fort of Good Hope. The aim was to establish a refreshment station to supply the crew of the Company's passing trading ships with fresh water, vegetables and fruit, meat and medical assistance. However, the first winter experienced by Van Riebeeck and his crew was extremely harsh, as they lived in wooden huts and their gardens were washed away by the heavy rains. As a result their food dwindled and at the end of the winter approximately 19 men had died.

The arrival of Van Riebeeck marked the beginning of permanent European settlement in the region. Along with the Council of Policy, Van Riebeeck came equipped with a document called the ‘Remonstrantie’, drawn up in the Netherlands in 1649, which was a recommendation on the suitability of the Cape for this VOC project. 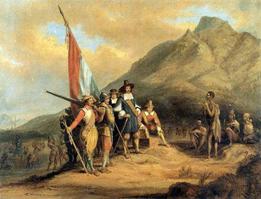 Van Riebeeck was under strict instructions not to colonise the region but to build a fort and to erect a flagpole for signaling to ships and boats to escort them into the bay. However, a few months after their arrival in the Cape, the Dutch Republic and England became engaged in a naval war (10 July 1652 to 5 April 1654). This meant that the completion of the fort became urgent. Fort de Goede Hoop – a fort with four corners made of mud, clay and timber – was built in the middle of what is today Adderley Street. Around this a garden was planted and meat was bartered for with the Khoikhoi (who were initially called Goringhaikwa, and later Kaapmans). The construction for Castle of Good Hope which stands today only began in 1666, after Van Riebeeck had left the Cape, and was completed 13 years later. 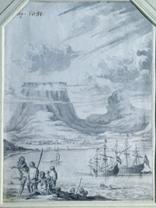 Although the VOC did not originally intend to establish a colony at the Cape, permits were issued in February 1657 to free nine company servants (who became the Free Burghers) to farm along the Liesbeeck River in order to deal with a wheat shortage. They were given as much land as they could cultivate in three years but were forbidden to trade with anyone other than the VOC. With the number of private farms increasing, by 1659 the station was producing enough to supply any passing ship. The station also began to experience a chronic labour shortage and because the Khoisan were seen as ‘uncooperative’, slaves were imported from Batavia (now northern Jakarta) and Madagascar in 1657.

The land on which the Dutch farmed was used by the Khoikhoi and the San, who lived a semi-nomadic culture which included hunting and gathering. Since they did not have a written culture, they had neither written title deeds for their land, nor did they have the bureaucratic framework within which to negotiate the sale or renting of land with strangers from a culture using written records supported by a bureaucratic system of governance. Hence Van Riebeeck, coming as he did from a bureaucratic culture with a unilateral, albeit written, mandate to establish a refreshment station, refused to acknowledge that land ownership could be organised in ways different from the Dutch/European way. He denied the Khoisan rights and title to the land, claiming that there was no written evidence of the true ownership of the land. Consequently in 1659 the Khoikhoi embarked on the first of a series of unsuccessful armed uprisings against the Dutch invasion and appropriation of their land – their resistance would continue for at least 150 years.

In response to the growing skirmishes with the local population, in 1660 Van Riebeeck planted a wild almond hedge to protect his settlement. By the end of the same year, under pressure from the Free Burghers, Van Riebeeck sent the first of many search parties to explore the hinterland. Van Riebeeck remained leader of the Cape until 1662. By the time he left the settlement in May 1662 it had grown to 134 officials, 35 Free Burghers, 15 women, 22 children and 180 slaves. 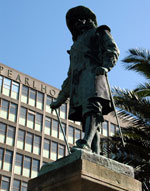 The day of Jan Van Riebeeck’s arrival became a public holiday with the 300th anniversary in 1952 and was celebrated as Van Riebeeck’s Day until 1974. During the tercentenary celebration on 6 April 1952, the Joint Planning Council (made up of members from the ANC, SAIC, SACP and COD) held mass meetings and demonstrations throughout the country as part of the lead up to the Defiance Campaign. The ANC and TIC issued a flyer entitled ‘April 6: People Protest Day’.