By the turn of the century, despite the fact that women of all races were still virtually restricted to the home, migrant labour had already begun to forge differences between the experience of African and white women. African men were no longer part of the traditional homestead economy. Instead they were away for extended periods of time, working under contract on the mines. In both town and rural areas the traditional pattern of the African family was destroyed, and this, in turn, undermined the very basis of tribal society. As Walker puts it, ‘African marriage became less and less stable an institution, with women gaining personal independence at the expense of the economic and emotional security within the pre-colonial family' (Walker 1990:19).

For African women in the reserves, where they soon began to outnumber the men, life was very tough. The burden of agricultural work and the responsibility of keeping the family together fell entirely on their shoulders. Many African women began to consider the alternative of moving into locations near to the towns. This provided the opportunity to take in laundry or opt for employment as domestic servants. However, it suited the government better to have African families living in the reserves so the women who moved to the town were confronted by government influx control measures. In the towns women also grew more independent and assertive; they became more politically aware and less compliant with the harsh, discriminatory restrictions placed on them by officialdom.

Women demonstrated against having to carry passes in three major campaigns, all of which are mentioned here. The first, in 1913, was in Bloemfontein and stands out not only because it was such an early outbreak of women's resistance, but also because of what Julia Wells calls its ‘strength and militancy' and because it was so ‘costly to the personal lives of participants' (Wells 1993:3). It also set the tone for later anti-pass action by militant African women. The second episode, which will be mentioned later (because the material is presented chronologically) was in 1930 in Potchefstroom, a small white-dominated town where officials tried to bully the women to comply with the particular labour needs of the town. In this case the grievance of the women was against lodgers' permits. The third campaign was masterminded in Johannesburg from 1954-1956, culminating in the march in 1956 of nearly 20 000 women to Pretoria. (This will receive close attention as the archive was created in celebration of this event.)

In each of these episodes women reacted not because of major political issues or broad developmental policies, but because the stability of their homes and families were in jeopardy. As Julia Wells puts it: ‘When it was women who resisted, it was because the crisis reached into the inner sanctum of home and family life. Each of the three [episodes of resistance]”¦ reflects a time when women themselves were directly and negatively affected by shifts in the application of the pass laws' (Wells 1993:9).

The women involved in this incident were an urbanised group living in the Waaihoek Location under the control of the Town Council of Bloemfontein. In 1913, partly as a measure to protect the increasing number of ‘poor whites' from black competition in the labour market, government officials in the Orange Free State declared that women living in the urban townships would be required to buy new entry permits each month. It was claimed that this would cut down on informal means of employment such as laundry work, illegal beer brewing and prostitution. Each month, when renewing her permit, a woman had to prove that she had ‘legal' employment. All ‘informal' employment was thus restricted, forcing the women to take on domestic work in Bloemfontein, which suited the ruling party, and which took the women away from their own homes and children. Those who refused to comply would be evicted and sent back to the reserves. Furthermore, there were allegations of sexual abuse related to the enforcement process by both white and black constables.

In an angry response to these prescriptive measures the women sent an all-woman deputation to the governor-general. They collected more than five thousands signatures on petitions, and organised impressive demonstrations to protest the permit requirement. Both the newly formed ANC and the African Political Organisation (APO) formed in 1902, under Abdurahman, gave encouragement to the efforts of the Waaihoek women. Abdurahman was a great admirer of Gandhi’s passive resistance and he encouraged the women to invite arrest by defying the hated regulations. African people across the board also felt bitter and disappointed about the recently passed Natives Land Act (1913), so tensions were high.

On 28 May 1913 a mass meeting of women was held in Waaihoek and it was decided to adopt a passive resistance stance. They would refuse to carry residential permits. Two hundred angry women marched into town to see the mayor, but when he was eventually cornered he maintained that his hands were tied. The women promptly tore up their passes, shouted remarks at the policemen and generally provoked the authorities into arresting them. Eighty women were arrested. There was another march the next day which soon turned ugly, with sticks being brandished. The women reputedly shouted at the police: ‘We have done with pleading. We now demand!'

Unrest spread to other towns throughout the province and hundreds of women were sent to prison. Civil disobedience and demonstrations continued sporadically for several years. Ultimately, the permit requirement was withdrawn. Women had succeeded in making their voices heard and this certainly inspired them for the future. 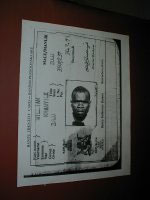 The term ‘pass' was used to describe any document that curtailed an African person's freedom of movement and had to be produced on demand by police or local officials. As far as African people were concerned residents' permits (also called ‘lodgers' permits'), special entry permits, permits to seek work and reference books all fell into the general category of the ‘pass'. Until the 1930s women were generally exempt from pass control but the Orange Free State was the exception; here there was a complex net of restrictions on African people, both men and women. Ultimately, however, all African women in the towns or so-called ‘white' rural areas and reserves were required to carry reference books, while only certain women in the proclaimed areas were subject to the permit requirements. The issue of permits in the urban areas began a few years before reference books were introduced. African women felt that the permits were simply forerunners of reference books and treated them with equal contempt.

One of the direct consequences of the Bloemfontein anti-pass campaign was the formation of early women's political movements. Women had proved their ability to take their fate in their own hands. An organisation called the Native and Coloured Women's Association was formed in 1912 to lay plans for the Free State anti-pass petitions and the deputation to the governor-general. Soon afterwards it was followed, and eventually superseded by a new, very significant women's movement, the Bantu Women's league (BWL). This was formed in 1913/14 as a branch of the ANC. At the time women were not accepted as full members of the ANC, but at least the BWL made the men realize that African women were becoming assertive and politicised. The BWL became involved in passive resistance and fought against passes for black women, but it also undertook the more traditional roles of catering and entertainment for the male-dominated ANC deliberations. During this time the BWL was under the leadership of Charlotte Maxeke, South Africa's first women graduate, who had been educated in the USA. In 1918 Maxeke headed a deputation of women who went to see Prime Minister Louis Botha to plead the womens' case. Following this, the Free State regulations on resident permits for women were relaxed.

The BWL appears to have survived until the early 1930s, but was absorbed into the National Council of African Women (NCAW), a less assertive movement that was inaugurated in 1933 and focused primarily on welfare issues. This body, also headed by Charlotte Maxeke, worked in cooperation with the white liberals in the Joint Councils Movement.