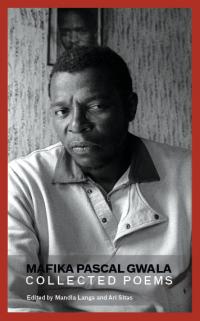 This volume of Mafika Pascal Gwala Collected Poems by Mandla Langa and Ari Sitas is an important contribution to restore the power of the voice of one of  most influential poet and political activists in the 1970’s and 80’s .

His two books met with muted applause, Joliínkomo (1977) and No More Lullabies (1982) were there by the late 70s and early 1980s. By then, a collective book, Exiles Within, the allure of black writing was in decline. The struggle got ugly, the words uglier, Gwala entered the fray of the civil war by working alongside many trying to modify the rising authoritarian populism of Zulu-ness, his and Liz Gunner’s Musho!(1991) made the case for an imbongi tradition “from below.”

Mafika Gwala exists within a continuum of poetry in Natal – a continuum that he ruptures: there are the primordial moments of Benedict Wallet Vilakazi writing in Zulu and establishing a defiant sense of nationhood which contrasts sharply with HIE Dhlomo’s English take on nationhood and class. A close reading of their respective poems on the Valley of a Thousand Hills would be a starting point. Both mark the shift from Native to African. Then, there is the poetry of Mazisi Kunene, which takes Africanism, Zulu-ness and resistance to a new level. The irony was that Mazisi Kunene wrote in isiZulu and had to translate his work into English due to his exile years. And then there is Mafika Gwala. - From the introduction by Langa and Sitas.