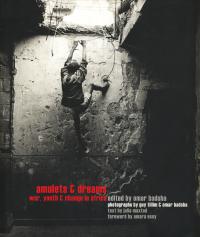 “This book should be seen as an attempt to come to grips with a specific issue that is causing concern in Africa: that of child soldiers who are victims of nihilistic war. It is claimed that the impact of globalization and the tension between continuity and change are particularly acute for children in Africa.

Increasingly, the potency and potential of young people are being exploited to sustain the power of those in authority as well as those seeking to replace them. Thus, young people are unable to realise the promises of the new global economy.

The highly original text in this book analyses the unacceptable involvement of Africa’s children war. The photographs strikingly illustrate African societies in which all aspects of “normality” in daily life are violated.

Together, while exposing the dangers facing these children, the text and photographs appear to ask what will take the place of “abnormality” in these societies. Besides suggesting the rudiments of a possible solution, they make a powerful and provocative statement of the African condition today.”